A few days ago, we wrote about vintage miniature and spy cameras, one of the must have accessory of any decent spy used to keep a track of his findings – like blue-prints, weapons, or any tactical installation. The other must-have accessory any James Bond-like character would have carried with him absolutely anywhere, is probably a very, very discrete spy gun, as a spy not only need to inconspicuously take pictures, but also need to inconspicuously sometimes kill people. And when given “license to kill”, it’s still better to do it with as little fuss as possible.

We’ll start with the “largest” of the bunch, more conventional pistols, which are still portable enough to be hidden in “plain sight”. Graciously provided by Alan Trigger, from “Little Gun” collection in Belgium, these pictures remind us of the era of Victorian (and Wild West) engineering, sometimes more deadly when we care to admit.

Spy gun: Similar thing has been patented in US in 1904:

.06 caliber. Also made in England, in 1870. Gives a whole new meaning to nuptial agreements:

How many times we read about this in pulp fiction? Here is how this little deadly device looks:

Pistol inside a lock

American-made, controlled by two keys, caliber .38. “You can lock me in, but you’re gonna regret it”

.12 caliber – what kind of circumstances would prompt the use of this one?

Update This gun is not a really a walking stick. It is a “hunting crop”. The little leather tab at the end would obviously prevent it being used as a cane. It is intended to smack a horse or dog during cross-country fox-hunting, without hurting them; the curved handle at the top allows the rider to pull gates open and shut without dismounting from the horse. (However, your reference to Moriarty is still well-taken. Sherlock Holmes carries a hunting crop as a weapon several times in the stories about him!) – info by Kevin K.

9mm caliber. Aahh…saving these souls from the plight of their mortal coil. May they rest in peace, as I will definitely pray for them…

The trigger is in the eye of this hook! Probably the smallest gun on record –

When you need to catch someone unaware. Attach one end of a string to the door and another end to the gun. The poor guy opens the door and… BOOM!

Gun inside the suspenders

US-made, caliber .32 for the Bachelor Club:
(or when you starting to lose in poker)

Pull the little ball at the end and shoot. Caliber .22

Getting back to vintage-tech, this extreme example of palm-sized, spring operated pistol hails from the bad old days of prohibition and gangsters – when arson was the main occupier of the firemen. Max Johnson sent us the photos, adding that such guns “were widely used by Chicago firemen… My dad’s dad had one he got from a friend who was one of these firefighters” –

Update: They were manufactured by the Chicago Fire Arms Company, usually 32 caliber. One was used to assassinate President McKinley in 1901. 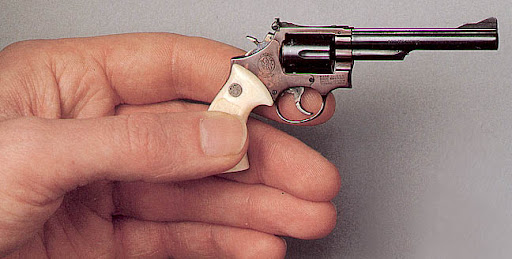 Kolibri by Pfannl Franz – Vintage key-chain-sized gun (2.7mm caliber)
This is a fascinating model, much sought by collectors: 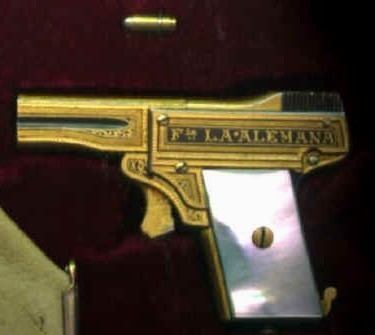 Other miniature pistols and guns – this time a collector’s scale models, but fully functional. They are mostly creations of Michel Lefaivre of Paris, France (see more here)

P08–Luger (a working miniature). The 2/5 scale model represents about 600 hours of precision work:

The miniature craftsmanship and detail is often astonishing: 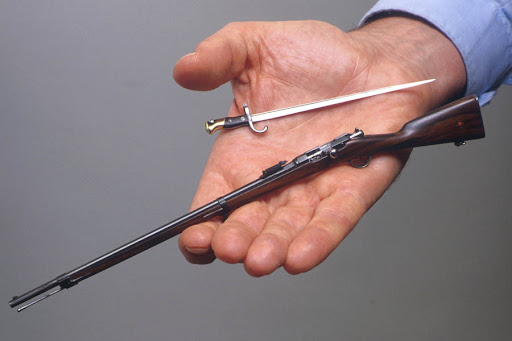 The following is a series of strange-looking small pistols and other guns, which we hesitate to identify without consulting with collectors:
(let us know if you aware of any of these models)
Update: thanks to all commenters for great info!

The first pistol is James Reid “My Friend” knuckle duster circa 1880s, 22 rimfire:

The pistol below is so-called squeeze pistol. Most were French, held four rounds and were six or seven millimeter in caliber:

Below is one of the “Duckfoot” pistols. “They were reportedly favored by sea captains and prison warders because of their ability to keep multiple people at bay” (see more here) –

The following is some sort of pepperbox pistol. These were popular in the US prior to the introduction of the Colt revolver:

“High Standard” pistol model number DM101. These were made in .22 LR and in .22 Mag, and were issued to certain state police agencies as a backup gun: 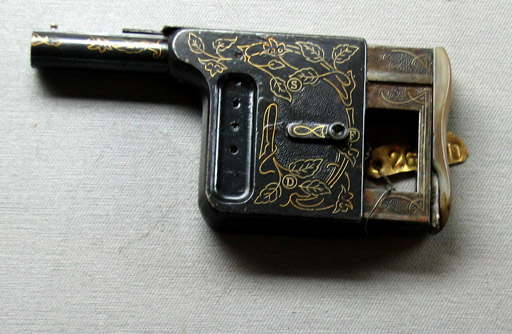 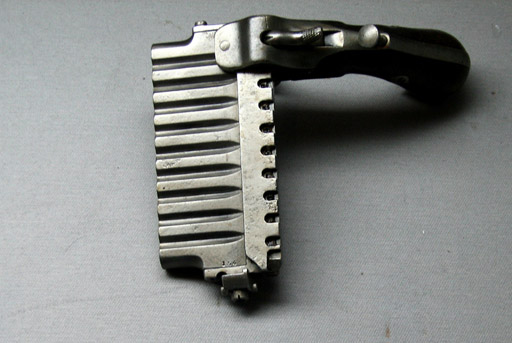 If your thing is to greet the mid-day with an exquisite cannon blast, then take a look at this: “A miniature brass cannon barrel and brass-mounted adjustable circular magnifying glass fixed to a circular white marble base”, all only 23 cm in diameter:

How about a portable cannon? Not much is known about this curiosity:

A deadly handshake: Glove Pistol (must be pretty awkward to carry it around)
update:“It was meant to be punched into someone’s belly, to help soften the sound of the gun, and to shoot them”.

Gun powder flask with sundial (16th century) – more info
It is also a compass and a watch – only 10 cm in diameter. Made in Germany, in 1590…imagine that.

Spy Guns of the Future Past

We just have to mention miniature rayguns from the future that never was. Look at these Steampunk Rayguns – creation of antiMichael from Make:Blog 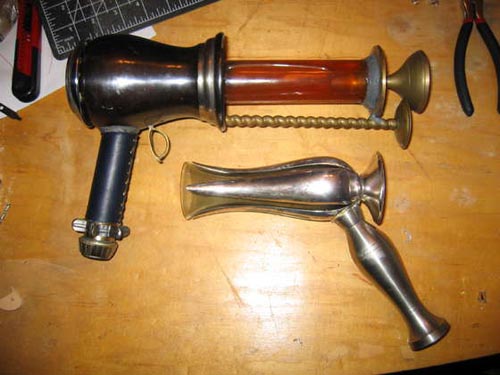 And a real beauty: The Distracted Alchemist’s Ray Gun: 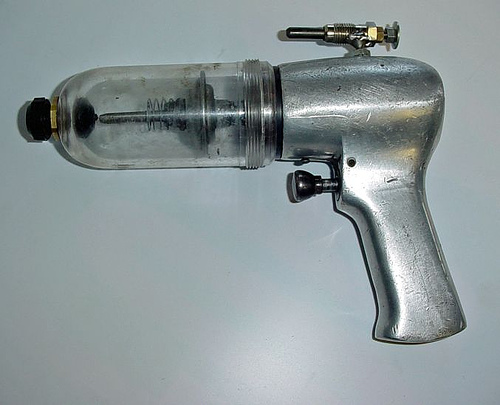 And this quick collection of Miniature Spy Guns would not be complete without Robert Rodriguez’  “codpiece revolver” which was featured in two of his movies (“Desperado” and “From Dusk Till Dawn”). The gun is milled aluminum and ‘erects’ itself on a spring loaded mechanism… before firing deadly shots! A funny version of the caliber .32 for the Bachelor Club featured above.